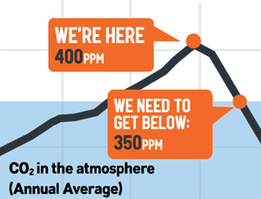 “If humanity wishes to preserve a planet similar to that on which civilization developed and to which life on Earth is adapted, paleoclimate evidence and ongoing climate change suggest that CO2 will need to be reduced from [current levels] to at most 350 ppm.” - Dr. James Hansen

From floods, to wildfires, to tornadoes, we are already beginning to see the first effects of Global Climate Destabilization and how it will affect communities around the world. So far, we've only experienced about 1 degree (Celsius) of warming and the results are abundantly clear. Further warming will soon be catastrophic to human life on earth: creating more extreme weather conditions, desertification, drought and crop failures,  floods, ocean acidification, and sea level rise that could put entire island nations underwater.

What is Climate Justice?

“No community should be saddled with more environmental burdens and less environmental benefits than any other. Unfortunately, race and class are the best indicators of where you can find more the good stuff like parks and tress and where one might find the bad stuff like power plants and waste facilitates” – Majora Carter

The heart of climate justice is the understanding that the urgent action needed to prevent climate change must be based on community-led solutions and the well-being of local communities, Indigenous Peoples, and the global poor, as well as biodiversity and intact ecosystems.

Indigenous Peoples, peasant communities, fisherfolk, and especially women in these communities, have been able to live harmoniously and sustainably with the Earth for millennia. They are now not only the most affected by climate change, but also the most affected by its false solutions, such as agrofuels, mega-dams, genetic modification, tree plantations, and carbon offset schemes.

The historical responsibility for the vast majority of greenhouse gas emissions lies with the industrialized countries of the Global North. It is imperative that the North urgently shifts to a low carbon economy. At the same time, in order to avoid the damaging carbon intensive model of industrialization, countries of the Global South are entitled to resources and technology to make a transition to a low-carbon economy that does not continue to subject them to crushing poverty.